The Grand River Sailing Club kicked off their 2021 Summer Racing Season with the R. Smithe Builders Cupon June 2nd, immediately following the traditional Blessing of the Fleet.  Patti Edwards, a longtime member of the sailing club, lead the boats in prayer as they headed out to Lake Michigan to start the first race.  Due to the backlog of work being done at local marinas, the Jib & Main division started off the season with only 2 boats participating, but the Spinnaker Division had a full complement of 5 boats. 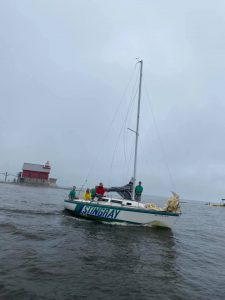 Stingray Coming in from a foggy 4th race. Photo Courtesy of Ken Gauld

Unfortunately, incoming storms on June 9th forced GRSC to cancel the second race of the series.  In the 3rd race, light winds didn’t prevent all the participants from finishing the race, and on June 30th, the racers sailed through medium winds and light fog to finish out the series.

The second series of the season, the North Shore Marina Cup, started on July 7 and will wrap up on July 28.

Share this ArticleLike this article? Email it to a friend!
Email sent!